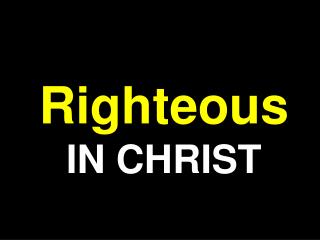 LESSON 43: Moroni Teaches Faith in Jesus Christ - . purpose. to encourage each child to exercise faith in jesus christ. i

Jesus Christ is Risen! - . it is appropriate that we pause in our study of prophecy to talk about the resurrection of

Session 2.1 The Person of Jesus Christ - . michael pascual institute for pastoral ministry. background and goal of this

God Takes Care of the Righteous - . in the midst of god’s rebuke for the wicked we can fail to see what god is doing

Go Ye and Teach - . the falling away. www.latterdaytruth.org. events in the apostasy. christ crucified unjustly arose on

Christ Is Risen - . let no one caught in sin remain inside the lie of inward shame but fix our eyes upon the cross and

Chapter 3: The Eucharist - . the sacraments – source of our life in christ. 1. the institution of the eucharist

How to Print - . reference books. marks of the church founded by christ. one holy catholic and apostolic church. the

Seven times a day I praise You, Because of Your righteous judgments - Psalm 119:164 - . evening prayer compline

A. After Life for the Righteous: What? - . heaven is not the end of the world life before death: what ? life after death: