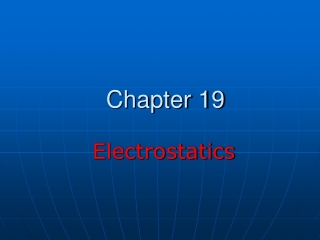 Chapter 19. Electrostatics. A Bit of History. Ancient Greeks Observed electric and magnetic phenomena as early as 700 BC Found that amber, when rubbed, became electrified and attracted pieces of straw or feathers Magnetic forces were discovered by observing magnetite attracting iron. Chapter 19 - . cancer. study questions. what are characteristics of cancer cells? what are the 3 stages in the

Chapter 19 - . sentencing and punishment. sentencing. the imposition of a criminal sanction by a judicial authority.

Chapter 19 - . inspiration and expiration. ventilation. breathing movement of air from outside the body into the

Chapter 19 - . the atmosphere in motion. section 1. air pressure is the weight of the air as it pushes down on earth

Chapter 19 - . rain forest riches. eukaryotic diversity. a eukaryote is any organism of the domain eukarya ; eukaryotic

Chapter 19 - . magnetism. clicker. a wire of resistance 2 ohms has been shaped in to a pentagon. what is the equivalent