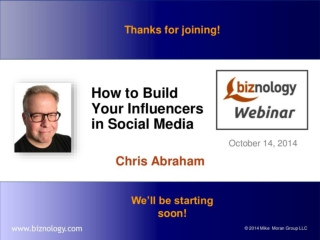 How to Build Your Influencers in Social Media

Whether you’re just dipping your toe into the social media waters or you’re a competent swimmer, there’s always more you can do towards increasing your online presence by building up your influencers in social media. Social media is made up of the people you’re doing business with now, your current sales channel, your past successes, and your future prospects. All those potential Likes, Plusses, Stars, Followers, and Friends are more than num¬bers. No matter where you’re starting from, this webinar will help you grow both your numbers and influence online. In this webinar, you’ll find out how to build and buff your brand online, working both on developing supporters and influence by expanding your brand onto different social media and communication platforms while increasing, deepening, and unifying the network you have with the network you’ll start developing over time. Specifically, sorting out ways to use one platform as "gravity assist" to the others. How to leverage your lists to grow your social media profile and how to activate your social media presence in order to grow your email lists and even convert your friends and followers into deep contacts who can be prospects, clients, and sales. Don’t worry, Chris will break it all down into step-by-step recommendations on what to do, how to do it, and who to use. In this free 30-minute Biznology® webinar, Chris Abraham will help you take all your disparate online communication channels and unify and then activate them; or, if your hands are empty and you’re just starting out, Chris will not only launch you on your way to being as influential online as you are in real life but using social media’s “gravity assist” to slingshot your business into the stratosphere, going from local to global. Special presentation sponsored by BarnRaisers, GaggleAMP, Gerris digital, and MENG (NJ Chapter) Chris Abraham, digital strategist and technologist, is a leading expert in digital: search engine optimization (SEO), online relationship management (ORM), Internet privacy, and online public relations with a focus on blogger outreach, blogger engagement, and Internet crisis response. Chris is founder and principal consultant of Gerris digital, an agency devoted to online brand promotion and protection through influencer outreach and engagement. 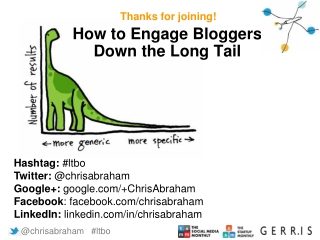 My presentation is described thus, “A step-by-step walk through of a campaign that Sally Falkow and I did for Mizuno Running. See what we did to engage and activate hundreds of bloggers, from the top 100 running bloggers down the every single blogger who self-identified with being a Runner.” Mizuno USA hired me to join their AOR, McKinney, to help them leverage the power of online influencers and social media to help introduce an online runner’s community they were launching called the Mezamashii Project. The Japanese word “mezamashii” means “brilliant” and Mizuno wanted to let runners know what it was like to have a brilliant run. Since Mizununo might not be top-of-mind when American runners think of buying shoes, the job that I was given was to make sure the Mezamashii Project was launched in a big way. Long Tail Blogger Outreach My portion of the campaign was online influencer marketing, including reaching out to 100 A-list runners, a task I shared with fellow outreach marketing rock star, Sally Falkow of Meritus Media, as well as “everyone else,” which I call long tail blogger outreach. What this Cluetrainian idea means is that the combined influence and impact of having hundreds of bloggers and online influencers speak on behalf of Mizuno is more important that having a handful of A-list “celebrity” bloggers on board. Mizuno was smart: they not only engaged an agency like McKinney, reached out to the top celebrity and A-list bloggers, but also were willing to reach out to and engage any and all bloggers who in any way self-described themselves as runners. What is a runner? Well, according to Runner’s World magazine, a runner is anyone who straps on a pair of shoes and ambles down the block. Every Blog is Sacred This includes both Ultramarathoners, crazy folks who run upwards of 3,100 miles, to someone like me, a 44-year old college rower who is now trying to reduce from 285 lbs by hitting the road, to someone who has never ever gotten off of the couch but now is attempting to go from Couch to 5k by using Jeff Galloway’s Run Walk Run method of training to run. I wanted them all! Funny thing was: most of the running celebrities were already sponsored by Nike, New Balance, Saucony, and Brooks. It Takes a Village We used a combination of good old Google search and a team of researchers I work with to collect the hundred top-runners as well as the thousands of regular bloggers who blogged about any number of topics: 5ks, 10ks, CrossFit, weight loss, running, jogging, half-marathons, marathons, triathlons, sprinting, personal training, going to the gym, and loads of other running- and training-related pastimes. While Sally and I reached out to those hundred top bloggers by hand, reaching them via email as well as through their social channels, including email forms and even via private message on Daily Mile, it was a different thing entirely across the long tail. 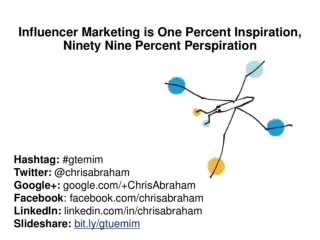 This is a presentation I am giving to the Elements of Communications Planning class at Georgetown a fun-filled presentation about earned media influencer marketing. 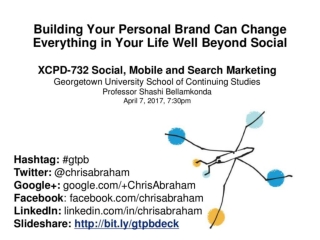 Building your personal brand is still possible even in a world that's polluted with an infinity of aspirational online and social media influencers. Having influence and building your own personal brand can be -- and often are -- different things entirely.