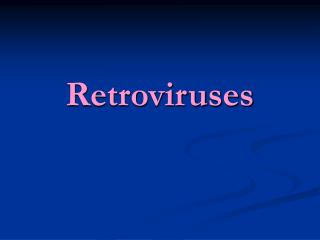 Retroviruses - . retroviruses. probably the most studied group of viruses in molecular biology!!! enveloped,

RETROVIRUSES - . characteristics. name originates from the fact that they use reverse transcriptase (retroviruses)

Classification of Retroviruses: - . divided into 3 subfamilies based primarily on pathogenicity rather than genome

Chapter 22 Retroviruses and Retroposons - . 22.1 introduction. retroviruses : rna viruses with the ability to convert its

Retroviruses and Trans(retro)posons - . transposons. dna fragments (elements) with the capacity to move in the genome