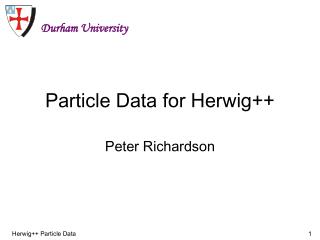 Durham University. Particle Data for Herwig++. Peter Richardson. Particle Data. Some people think that the particle data in event generators is simply inputted from the PDG. However there is a lot more to it.

measurements of jet properties - . lily asquith (anl) boost 2012, valencia. outline. what are jet shapes, and why are we

1/21 do now - . a particle of mass m slides down a fixed, frictionless sphere of radius r starting from rest at the top.

Aerosol Physics and Particle Control - . pm. particle shape: -can be found in spherical, rectangular, fiber, or many