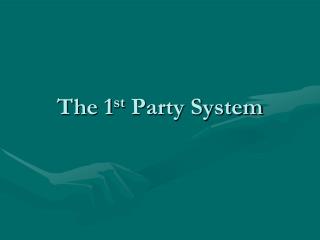 The 1 st Party System. 1. Between 1783 and 1800, the new government of the United States faced the same political, economic , and constitutional issues that troubled the British government’s relations with the colonies prior to the Revolution. Assess the validity of this generalization. (80) 1 st Grade Auction Party - . friday, september 19 th the burton’s house if you did not receive an evite go to: b

My 1 st dance party - Welcome to my memories of ourworld wish u get the same happiness olwys nd nvr leave ourworld !. my

St. Louis Party Bus - This is a great option so that you can draw out a comparison between the rates of flitways st.

2 Party System - . analyze the impact of the rise of the two-party system in georgia. analyze- to divide a complex idea

Two Party System - . #apush. learning goal : students will be able to describe the typical whig voter in the 1840s. 2

Two Party System - . what did george washington think about the party system? summarize each of these quotes from

The 1 st Thanksgiving - . insert 5 extra pages add a fact about the 1 st thanksgiving to each page insert a clip art to

Welcome To The 1 st Choice Electrical Estimating System - . #1 in estimating software. click f5 to open the program then