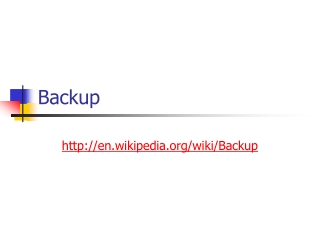 Backup. http://en.wikipedia.org/wiki/Backup. Backup. Backup refers to making copies of data Copies may be used to restore the original after a data loss Copies are typically called "backups" Backups are useful primarily for two purposes: