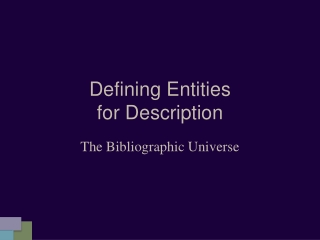 Defining Entities for Description. The Bibliographic Universe. Why bother?. Why define a set of objects to describe? Can’t we just let everyone tag everything, no matter what it might be?. The utility of limits. E-R Model - . a database can be modeled as: a collection of entities, relationship among entities. an entity is an object

CREATING A DATABASE FROM A TO Z - . what is the concept? how will the user use this file? tables what are the entities?

Defining a Myth - . write a one sentence description of what creation myths does. in a small group. agree on one version

Getting Started with VHDL - . vhdl code is composed of a number of entities entities describe the interface of the