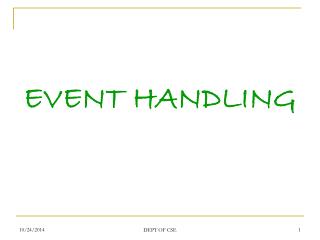 EVENT HANDLING. Event handling is at the core of successful applet programming There are several types of events The most commonly handled events are those generated by the mouse, the keyboard, and various controls, such as a push button Events are supported by the java.awt.event package.

How We Brought 1,367 People To Our Event â€¨With 0$ Budget - Are you in the midst of planning and promoting your next

Cargo Airport Services and Its Cargo Handling Solutions - . a presentation to hanjin hdq february 20, 2013. a truly

Materials Handling, Storage, Use and Disposal - . 29 cfr 1926 – subpart h. objectives. in this course, we will: discuss

Chapter 9 Merchandise Buying and Handling - . learning objectives. describe the major steps in the merchandise buying and

The Ten Principles of Material Handling - . the key to greater productivity, customer service and profitability.

Create a Simple Game in Scratch - . mike scott university of texas at austin many thanks to barb ericson of georgia tech.

Event Handling - One of the key concepts in gui programming is event handling. something (mouse click / key press, menu