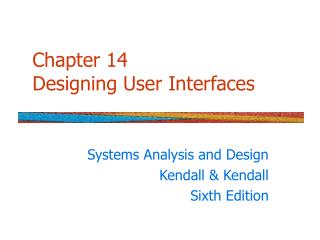 NTFS, Users, and Groups - . chapter 7. overview. in this chapter, you will learn how to create and administer windows

Chapter 14 Graphical User Interfaces - . chapter goals. to understand how to create frames to use inheritance to

Travelers’ User Guide - If your travel coordinator enters trip details on your behalf, you only need to focus on

Chapter 9 Interfaces and Polymorphism - . chapter goals. to learn about interfaces to be able to convert between class

Designing Productive and Satisfying Work - . chapter 4 . learning objectives . after reading this chapter you should be