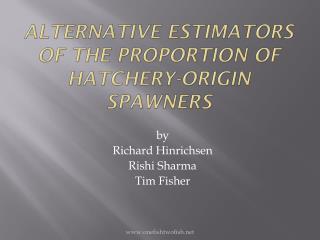 Alternative Estimators of the Proportion of Hatchery-Origin Spawners Alternative Estimators of the Proportion of Hatchery-Origin Spawners

Hypothesis Tests Regarding a Parameter – Single Mean &amp; Single Proportion - . overview. this is the other part

ADR Alternative Dispute Resolution - . a toolkit for the hr professional compiled by the employee and labor relations

Sustrate Spawners II: Killifish - . mops and peat. introduction. our last group of spawners use some unusual techiques to