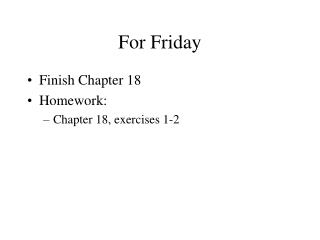 Test on Friday! - . lesions of retinostriate pathway. lesions (usually due to stroke) cause a region of blindness called

Fabulous Friday, September 11 - . “two ways of seeing a river” chpt. 1 of narrative of the life of frederick douglass

For Friday - . no reading homework: chapter 9, exercise 4 (this is very short – do it while you’re running your

Homework : RoA RQs due Friday - Frontpage : respond to this statement : it is better to let ten guilty men go free than Happy Friday! - . match the presidents with events which happened while they were in office… 1.washington a. alien

Happy Friday! - . bell ringer:. objective:. swbat: compare and contrast science and pseudoscience. what are some examples