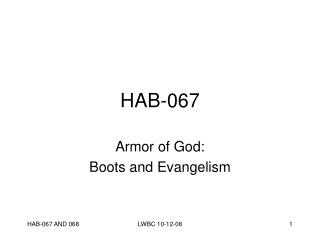 HAB-067. Armor of God: Boots and Evangelism. The Boots. And your feet shod with the preparation of the gospel of peace (Eph. 6:15). Because the foot soldier depends upon good footwear to take him where the action is, combat boots play an important role in his career. AS-2216-067/AA - . clarification of the formation, dissolution, merger or movement of an academic

AS-2216-067/AA - . clarification of the formation, dissolution, merger or movement of an academic

North Coffee Equipment TJ-067 Uncrating - . it took months, but we finally received our roasters. it comes in a big heavy