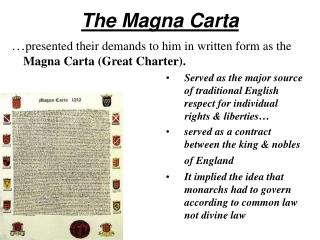 The Magna Carta. … presented their demands to him in written form as the Magna Carta (Great Charter). Served as the major source of traditional English respect for individual rights & liberties… served as a contract between the king & nobles of England

King John and the Magna Carta - . from: http://middleages.pppst.com/rise-of-monarchies.html. could the rich control the

King John and the Magna Carta - . could the rich control the king?. around the picture below, you can read some of the

MAGNA CARTA - . renaissance. rebirth of the arts and new interests in learning. it took place in the mid 1400’s. signed

Magna Carta - . quiz. what does the “magna carta ” literally mean? between 400-500 ad, what two germanic tribes

MAGNA CARTA - . 1. in the future no bailiff shall upon his own unsupported accusation place any man on trial without

MAGNA CARTA The Great Charter - . 1215 runnymede, england. magna carta 1215. widely viewed as one of the most important

The Magna Carta - . could the rich control the king?. around the picture below, you can read some of the qualities which

THE MAGNA CARTA - Origins of our government: important documents. the magna carta. written in england in 1215 written by