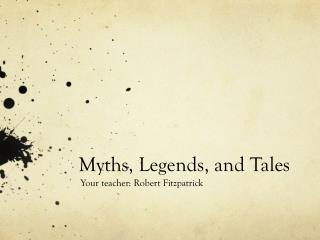 Myths, Legends, and Tales. Your teacher: Robert Fitzpatrick. Class Rules. Only one person talks at a time. When somebody speaks in class, be a respectful, engaged listener. Use the bathroom before class. Treat others and your surroundings as you would like to be treated. Myths, Legends, and Tales - . a myth is a story that was created to explain the mysteries of the universe. a legend is

Myths, Legends, and Folk Tales - . the legend. noun 1. a non-historical or unverifiable story handed down by tradition

Myths, Legends, Folk Tales, and Fables - . why we write and tell stories. myths. attempt to answer basic questions about

Myths and Legends - . nov. 3 swbat discuss why versions of the cyclops story is a recurring myth within cultures.

MYTHS AND LEGENDS - . croatian. about water. the water court. mysterious creatures who live in and around the water

Myths and Legends - . sept. 29 th swbat present their creation myths / discuss what characteristics a one must possess in