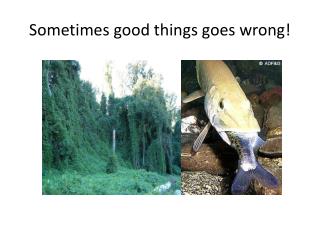 Wrongful Termination: When Doing the Right Thing Goes Wrong - When an employer fires you for no good reason, or creates

Logical Fallacies - . why you’re wrong and i’m right!. what is a fallacy?. fallacies are defects that weaken

Things that can go wrong - . what do we do?. logic error – the program is incorrect  environment error - e.g. out of

Projects Don’t Go Wrong, They Start Wrong - . six simple things you can do to start your project right betsy guthrie,

Welcome to the Leadership for Safety Webinar When Things Go Really Wrong: - Responding to patient safety disasters. the

Situation Ethics - Situations ethics is where there is no absolute right or wrong, but everything is looked at in

Habit 1 – Be Proactive - . proactive people. know what they stand for and have a strong set of values listen to their