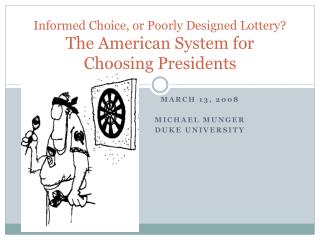 Trauma Informed Care: A shift in thinking for service Providers in DE - Outline. what is trauma?what is trauma informed

CRM Solutions of Choice: Siebel and Salesforce - . a development perspective varsha indurjith. why are we discussing

The American West - How was the “indian problem” dealt with?. the american west. how would you solve the problem?.

“The Lottery” - . writing prompt (10 points). what is “the lottery?” why do you think writers imagine and write

Get To Know Your Presidents - . a look at the men who make america. works cited:. kelly, martin. the everything american

The First Presidents - . explore this powerpoint to learn more about our nation’s first three presidents. thomas

Choosing, editing graphics - . choosing photos. try to find the image that helps the reader the most understand the news.

Housing market between choice and chance - . housing allocation ‘by lottery’ in the rental market of eindhoven.