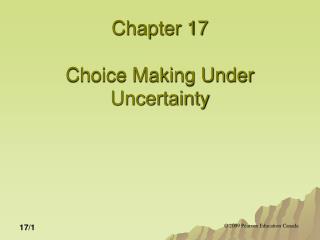 Chapter 17 Choice Making Under Uncertainty. Calculating Expected Monetary Value. The expected monetary value is simply the weighted average of the payoffs (the possible outcomes), where the weights are the probabilities of occurrence assigned to each outcome. Expected Value. Chapter 21 Haircoloring - . “the only thing that makes life possible is permanent, intolerable uncertainty: not knowing

Process Choice and Layout Decisions in Manufacturing and Services Chapter 7 - . chapter objectives. be able to: describe

Chapter 1-5 Review - . drafting 1 and 2. chapter 1. why is it important to carefully think about a career choice? what

Managing Decision Making and Problem Solving - . learning objectives. after studying this chapter, you should be able to:

Chapter 8 - . risk and return. learning objectives. calculate profits and returns on an investment and convert holding