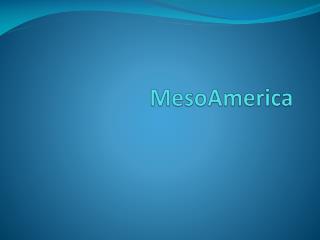 MesoAmerica. Theories of where they came from: . First Americans originated in the Gobi Desert Some migrated to Siberia around 15,000 years ago Crossed the Bering Strait in Alaska Land bridge probably existed at the time Gradually dispersed Throughout North and South America.

Mesoamerica - . 300s-900s yucatan to central america. the maya. each city had a ruling chief bureaucracy of nobles

Early Mexico Mesoamerica - . the olmec. olmec 1400 bc to about 400 bc. 1. 1st ancient pre-columbian people living in the

MESOAMERICA: - . maya, aztec, inca. essential question:. what are the similarities and differences between the three

Chapter 12.2 Classic Period Mesoamerica The Maya - . whap 2013. introduction/review. as teotihuacán flourished, in the

Climate of Mesoamerica and Caribbean - . prepared by adam carpenter, based on research by amy huff, battelle. climate

The Ancient Empires of Mesoamerica - . mesoamerica is the name given to the area of land from central mexico to costa

Mesoamerica, the Aztecs, and the Spanish Conquest - . mesoamerica. a civilization because it meets the definition.

MESOAMERICA - . by benjamin biedrzycki and cameron michelusi. introduction. welcome to mesoamerica!!!!!! we have 4

Civilizations of Meso-America - . aztecs, mayans and incas. aztecs. who were the aztecs?. civilization in the valley of