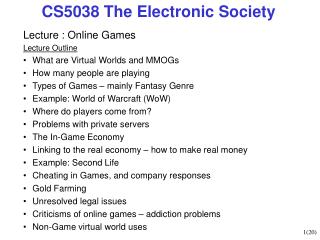 CS5038 The Electronic Society. Lecture : Online Games Lecture Outline What are Virtual Worlds and MMOGs How many people are playing Types of Games – mainly Fantasy Genre Example: World of Warcraft (WoW) Where do players come from? Problems with private servers The In-Game Economy

The Relationship between Business and Society - . chapter 1. society’s expectations. complex not focusing on right and How to access your electronic pay stub - . and more. things to remember:. all employees are paid through direct deposit In the networked society people, knowledge, devices, and information are networked for the growth of society, life and

ELECTRONIC FETAL HEART RATE MONITORING: Where are we and where are we going? - . gary d. v. hankins, m.d. the university