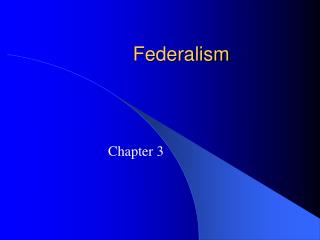 Federalism. Chapter 3. Defining Federalism. What is Federalism? Definition: A way of organizing a nation so that two or more levels of government have formal authority over the land and people. Intergovernmental Relations -

Review Questions - . based on the idea of federalism, can individual states tell the federal government what to do?. no.

BEARS WIN!!! - . american federalism . chapter 3. a form of government in which a constitution distributes power between

Federalism - . 1/26/2012. clearly communicated learning objectives. upon completion of this course, students will be

Copy the following onto Portfolio p40 - . federalism – (allow 3 lines for a definition). lesson 8.3a : ratifying the

Theories of European Integration II - . federalism vs. functionalism and beyond…. explaining theories and strategies of

Intergovernmental Relations - . forum of federations intensive course on democratic federalism. overview. what are

Chapter 3 Federalism Review - . a.p. government and politics . 1. a unitary system is a way of organizing government so

GOVT - . chapter 3 federalism. learning objectives. federalism and its alternatives. what is federalism?. in a federal