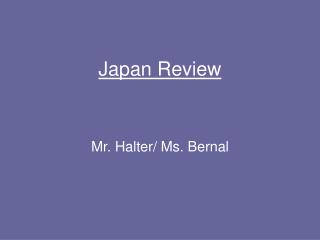 Japan Review. Mr. Halter/ Ms. Bernal. Which statement best describes an effect that geography has had on Japan?. Japan’s smooth coastline has prevented the development of a fishing industry  Japan’s large plains have made wheat growing a primary industry