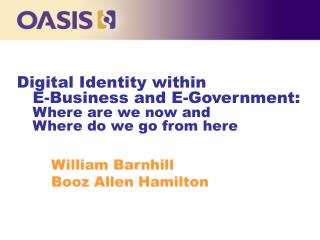 Digital Identity within E-Business and E-Government: Where are we now and Where do we go from here. William Barnhill Booz Allen Hamilton. Agenda. What are the basics of Identity 2.0? Where are we now? Where are we going? What does the future hold? Questions and Comments?. Sense-Shoot-Command on the Battlefield After Next - . koblenz symposium on information technology network centric warfare

Prince William and Kate Middleton - . the wedding of . the happy couple through the years. william. as a baby. kate. as a

Basic Cost Risk Analysis - . how to evaluate cost risk and uncertainty in your estimate. acknowledgments. this module was

Faith and Ron Kaplan, Psychologists, Kaplan and Kaplan Assessment Center Hamilton, Ontario - The evolution of the

The Lamb &amp; The Tyger By: William Blake - . by: cornball &amp; annaleigh. william blake. the titles are the