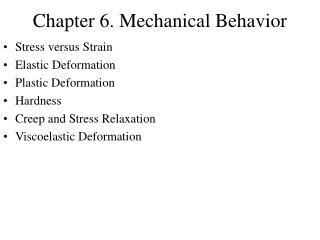 Mechanical Waves - . chapter 16. expectations. after this chapter, students will: know what a mechanical wave is.

Chapter 1 What is Behavior Modification? - . behavior. simple action can be overt (observable) can be covert (not

Chapter 5 Animal Behavior - . lesson 1 – what is behavior?. the behavior of animals. an animal’s behavior consists of

CHAPTER 6: MECHANICAL PROPERTIES - . issues to address. • stress and strain : what are they and why are they used