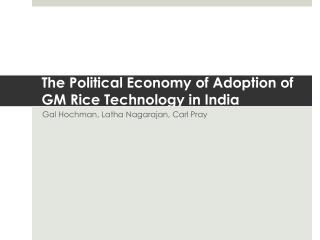 The Political Economy of Adoption of GM Rice Technology in India

The Political Economy of Adoption of GM Rice Technology in India Switch to Advanced Methods of Farming to Grow Quality Crops - In todayâ€™s time, you just canâ€™t get dependent

Global Food Security: What Roles for Technology and Trade Policies? - . kym anderson universities of adelaide and

The New Institutional Economics: The NIC - . arto lahti. why the history of iprs is relevant? the new institutional

18. Juni 2010 Lecture at the BOKU for Biosafety Class of Prof. Dr. Margit Laimer - Regulation of gm crops and the

Biotechnology for Sustainable Development - . africa review report on progress in the implementation of sd commitments

The Resurgence of Empire In East Asia - . the restoration of centralized imperial rule in