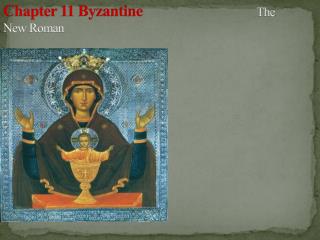 Chapter 11 Byzantine The New Roman. Constantinople. Strategic City-on a peninsula, Constantinople overlooked the Bosporus, the narrow strait between the Sea of Marmara and the Black Sea. Water protected the city from the Germanic invaders. The strait made it perfect for trade.

Byzantium Becomes the New Rome - . bell ringer. how can an ancient civilization such as rome still influence the modern

Heirs to Rome: The Byzantine Empire - . world history: libertyville hs. where was the ere?. capitol, constantinople,

Justinian - . part 3. in 527 c.e., justinian became the byzantine emperor. he sent an army to try to regain control of

Constantinople the New Rome - . the byzantine empire. was based on the christian faith, the greek language and the

The Byzantine Empire - . chapter 11.1. new rome. the roman empire was divided in 395 difficulty communicating between

11.1 The Byzantine Empire - . after rome split, the eastern empire, known as byzantium, flourishes for a thousand years.

The Roman Emperors - . information for teachers. for students. objectives. given this powerpoint, students will be able