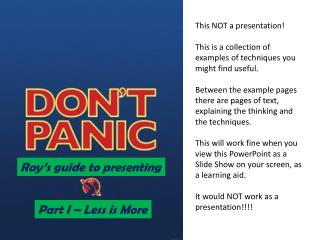 This NOT a presentation! This is a collection of examples of techniques you might find useful. Between the example pages there are pages of text, explaining the thinking and the techniques. This will work fine when you view this PowerPoint as a Slide Show on your screen, as a learning aid.

Eph 2:7 that in the coming ages he might show the immeasurable riches of his grace - In kindness toward us in christ

Seating and Mobility Solutions for Bariatric Consumers of all Ages - . presented by. jane fontein pdg vancouver, bc,

Ages &amp; Stages Questionnaires: Social-Emotional - . asq:se. what the asq:se is:. research-based social and