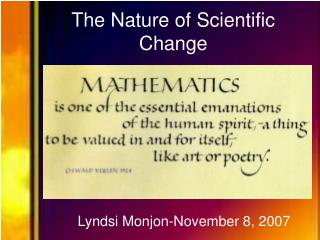 The Nature of Scientific Change

The Nature of Scientific Change Lyndsi Monjon-November 8, 2007 Quotes “The simplest schoolboy is now familiar with truths for which Archimedes would have sacrificed his life.” -Ernest Renan, 1883 “Science is the great antidote to the position of enthusiasm and superstition.”

The Nature of Scientific Change

Reading Street - . unit 3 week 1. what is changing in our world?. how do we change as we grow?. what do we learn as we

Consumer Attitude Formation and Change - . chapter eight. learning objectives. to understand what attitudes are, how they

Introduction to Scientific Visualization in the WestGrid Environment - Jon johansson what is scientific visualization?