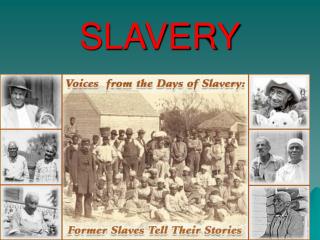 SLAVERY. The Beginning. Slavery began in the Americas in the early 1600’s. Before Africans were brought over, the Native Americans were forced into slavery. As most of the natives began dying out due to disease and harsh treatment, more slaves were needed.

slavery - States' rights. slavery. the presidential election of 1860. the southerners threatened to secede from the

Slavery - . chapter 8 -sectional conflict intensifies * the territory gained by the us in the mexican-american war

Slavery - . by: terina wisdom. the video about slavery. .

Slavery - . by: kristin sluyk &amp;jason perrone. how it all began:. the first africans in america arrived in

Slavery - . the economy of the south. tobacco rice paddies sugarcane biggest… cotton. cotton on the roadside, cotton in

Slavery - . table of contents. the middle passage. arrival in america. abolitionism and frederick douglass. the

Slavery - . just what drove the expansion of the british empire into one of the largest in history?. john