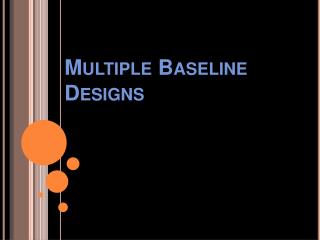 Other single subject designs part 2 - . another design is the a-b-a design. an a-b-a design (also known as a reversal

Group Discussion 13 - . describe the primary distinction between descriptive research and other research strategies.

Reversal Designs - . overview. one of the most important designs you can use can be used in a variety of settings can be

Small-N and Single-subject Designs - . susan varni fall 2002. small-n and single-subject designs where are we going?. why

SMALL-N DESIGNS - . what is a small-n design?. experiment conducted on only one or a few subjects. available population

Changing Criterion Designs - . changing criterion design. used to evaluate effects of a treatment that is applied in a