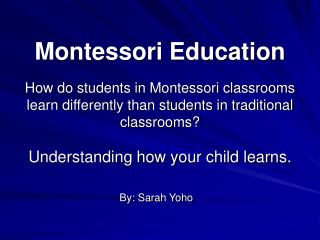 Montessori Education. How do students in Montessori classrooms learn differently than students in traditional classrooms? Understanding how your child learns. By: Sarah Yoho. Traditional Math: Learning Abstract Concepts with Abstract Symbols. How were you taught to multiply large numbers?.

Eight Principles of Montessori Education - . angeline lillard (2005) montessori: the science behind the genius.

Montessori 101 - . welcome to. by ms. venus. montessori philosophy. “every unnecessary help is really a hindrance to

Montessori Academy - Star montessori academy is preschool in vista, ca. it is an excellent opportunity for your