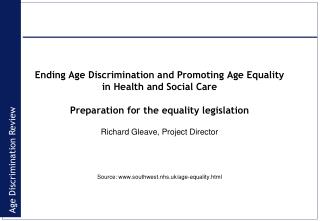 Equality and Diversity - . the context. race equality. age and discrimination. areas of inequality. religion and belief.

EQUALITY AND DIVERSITY - . lincolnshire partnership foundation nhs trust. our objectives to provide an opportunity in a

NLP – Language of Equality - . desiree cox. nlp. “ you cannot teach a man anything, you can only help him to discover

Getting old – ageism - . learning objectives:- to question the extent to which senior citizens should be respected

The Equality Act 2010 - . what has changed? what has stayed the same? practical implications. protected characteristics.

Equality and Diversity - . this workshop will provide you with an opportunity to explore and discuss in an informal but

ON EQUALITY - . democracy- key elements of democracy. rewrite the story in your own words.(in spl note book). democracy.

Equality of Resources - . ronald dworkin. a constraint on equality. dworkin’s theory of equality of resources buys into

EQUALITY AND DIVERSITY - . eric bater intending trainers ‘ course phase 4i 26 th september 2012. why are we doing

Equality Impact Assessments and Equality Act 2010 - . the change in terminology from impact assessments to impact

Promoting Safety and Health in the Workplace - . - contact center -. occupational safety and health center department of