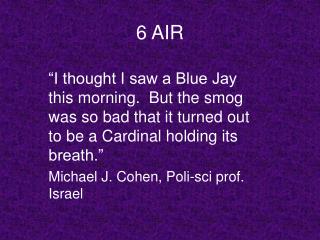 6 AIR . “I thought I saw a Blue Jay this morning. But the smog was so bad that it turned out to be a Cardinal holding its breath.” Michael J. Cohen, Poli-sci prof. Israel. Define Air Pollution. Air pollution is defined as harmful substances that end up in the air at unhealthy levels.