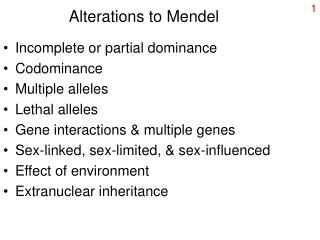 Chapter 5 - . heredity. gregor mendel. the father of genetics and heredity famous for his pea experiments was a monk in a

SENSORY/PERCEPTUAL - . eye alterations. refractive errors. overview a. the ability of the eye to focus on the retina

3 rd Marking Period Quarterly - . name the austrian monk who is known as the father of genetics!. thomas hunt gregor

Epistasis - . definition. epistasis is a form of gene interaction in which one gene masks the phenotypic expression of