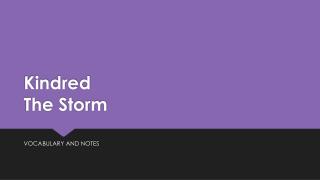 Kindred The Storm. VOCABULARY AND NOTES. Journal Entry 1 (Cycle 3). What people, objects, activities do you see in this image? What is happening in this story? How does it make you feel? Answer in SEVEN complete sentences. Journal Entry 2 (Cycle 3). KINDRED The River - . vocabulary. malevolent. “he gave me a look that i knew wasn’t as malevolent as it seemed.”.

Kindred - . applying theory to a literary text. “the

Octavia Butler’s Kindred - . take a minute to respond to these 3 different edition covers of kindred . what do you see

“The Storm” - . chopin. story background. “the storm” is second in a two part series. the first was called “ at

The Storm - . it’s here—how it looks and what to do inland personnel council meeting january 30, 2009. joel montero

The Perfect Storm - . the perfect storm. . . . a labor shortage?maybe. a skill deficit?probably. a shortage of knowledge

After the Storm - . the steps to restoring power click on slide to advance. recreated from carolina country, the monthly

The Perfect Storm - . “the public school is the greatest discovery made by man.” horace m ann. the perfect storm. if