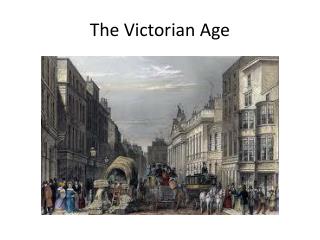 The Victorian Period - . 1837-1901 under the reign of queen victoria. peace and growth. the victorian era was a time of

Victorian Picture - . by harry and archie. princesses of wales. a prosperous victorian who can afford posh clothes. if

My Victorian Lifestyle - . by natasha. introduction. my name is natasha. i am 18 years old. i was born september 30,

WALT: Why were Victorian Women so annoyed… - . wilfs: describe the victorian ideal. explain why victorian women were

An Extravagant Victorian Feast - . (created at http://cookit.e2bn.org). step 1. we first of all decided what era we

Victorian Theatre and Popular Entertainment - . griffin mulvaney and jared diesslin. what were theatres like? . many

‘The Mid-Victorian Age’ - . unravelling britain: lecture 3. ‘the mid-victorian age: britain in the 1850s and

Victorian architecture - . during the reign of queen victoria of england, 1937-190. had a mix of different architectural

Alice’s Adventures in Wonderland - . by: lewis carroll. victorian era. this novel was published in 1865 during the

Victorian Era - . the victorian era pertains to the 64 year reign of queen victoria of england. she reigned from

Victorian Age - . literature. prof.ssa cynthia tenaglia. t he victorian age. the novel. there was a communion of

Tennyson, Browning, Arnold - . engl 203 dr. fike. a unit. all three are dramatic monologues, a form invented in the