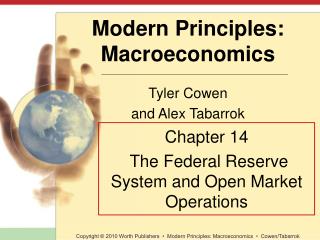 Chapter 14 The Federal Reserve System and Open Market Operations. Introduction. 2008: The worldwide financial system was in a crisis and banks and other financial institutions wanted to borrow more than $2 trillion. What could be done? Studying this chapter we learn… Chapter 13- The Federal Bureaucracy - . (1). define what a bureaucracy is, and summarize its key characteristics and its

G-13: The Federal Bureaucracy - . chapter 13- the federal bureaucracy. (1). define what a bureaucracy is, and summarize

MACRO - . domain focus. ssema1 the student will illustrate the means by which economic activity is measured. domain

Chapter 10 - . money. catch me if you can, scene 9. table of contents. what is money timeline federal reserve money slide

Lesson 4: - . government policy and real estate finance. introduction. in this lesson, we will cover: federal