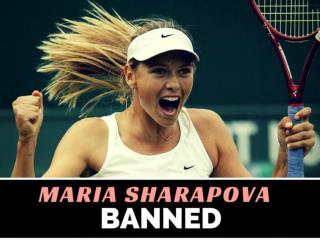 The Russian former world number one Maria Sharapova is banned for two years following her positive test for meldonium. MARIA YURYEVNA SHARAPOVA - . maria sharapova is a russian professional tennis player . she was born on april 19 in 1987.

Banned Books - Why? when is it right to censor a text? . banned books. a la.org. key vocabulary. challenged – a book is

Banned Books - Here are some provocative titles to consider... also, books inspire and create. they can provide

Banned On Amazon - Are you banned from amazon? has your selling privileged been removed? do you want to activate it

Banned Books Week - . september 29-october 6. what is a banned book?. books usually are challenged (and then banned from