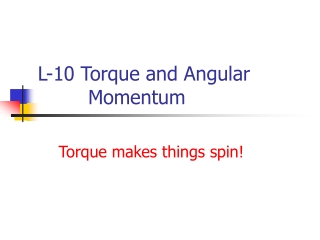 L-10 Torque and Angular Momentum. Torque makes things spin!. What makes something rotate in the first place?. TORQUE. How do I apply a force to make the rod rotate about the axel? Not just anywhere!. AXEL. TORQUE. To make an object rotate, a force must be applied in the right place.