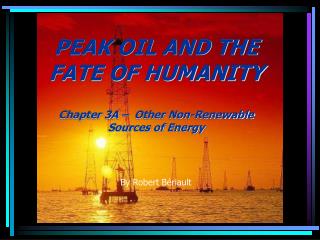 PEAK OIL AND THE FATE OF HUMANITY Chapter 3A – Other Non-Renewable Sources of Energy By Robert Bériault. But there’s lots of oil in Canada isn’t there? For example, you have the Queen Charlotte oil fields. I’m sure the moratorium will be lifted. MAN AND ENERGY A case for Sustainable Living through Renewable and Green Energy - . ali keyhani professor of electrical

Environmental Science - . unit 7 – energy (ste 7th ed. chapter ##). in the long run, humanity has no choice but to

Nonrenewable Energy - . chapter 15. 15-1 what major sources of energy do we use?. concept 15-1a about three-quarters of