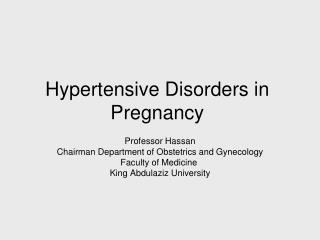 Hypertensive Disorders in Pregnancy. Professor Hassan Chairman Department of Obstetrics and Gynecology Faculty of Medicine King Abdulaziz University. Mrs F is a 30-year-old woman with a history of chronic hypertension and possible preeclampsia during her first pregnancy. Normal Pregnancy - . the possibility of pregnancy must be considered in every woman of reproductive age regardless of

Obstetric Hemorrhage - . anne mcconville, md. the direct leading cause of pregnancy related mortality in the united

TSH Level in Pregnancy - . gita majdi pgy4 endocrinology fellow may 2014. outline:. tft in pregnancy what is the normal

Skin Conditions or Disorders During Pregnancy - Yes, pregnancy is a beautiful thing and yes, it does make your skin glow

Hypertension in Pregnancy - . ayoub innabi. definitions of pregnancy-related hypertensive disorders: —. there are four