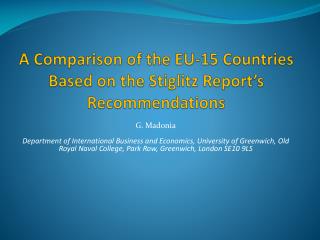 A Comparison of the EU-15 Countries Based on the Stiglitz Report’s Recommendations. G. Madonia Department of International Business and Economics, University of Greenwich, Old Royal Naval College, Park Row, Greenwich, London SE10 9LS. What I do. Selection Structure - . use to make a decision or comparison and then, based on the result of that decision or

Comparison of Teacher-Centered and Learner-Centered Paradigms - . from figure 1-2 in huba and freed, learner-centered

Development of FDA Recommendations for deferral of donors based on risk of BSE exposure - . alan e. williams, ph.d.