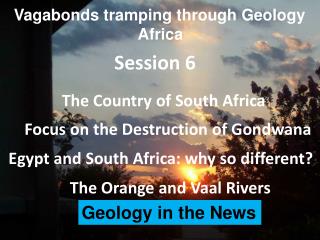 Vagabonds tramping through Geology Africa. Session 6. The Country of South Africa. Focus on the Destruction of Gondwana. Egypt and South Africa: why so different?. The Orange and Vaal Rivers. Geology in the News. More on the Bakkan Oil Shale Vagabonds of the Solar System - . chapter 17. guiding questions. how and why were the asteroids first discovered? why

Vagabonds of the Solar System - . chapter 17. a search for a planet between mars and jupiter led to the discovery of

A Wanganui Tramping Club initiative - . location. the trails are on approx 700ha of land owned by the wanganui district

Chapter 9 - Solar System Debris (Vagabonds) - . asteroids are quite small, and most have eccentric orbits in the asteroid

Geology - . justin p. jones. the world is a canvas. a geologist examines the many stories told by the earth’s rocks and

Geology - . sol 5.7. geology 1. what is weathering?. answer. the gradual wearing away of rock by the forces of wind,

Geology - . an overview of plate tectonics. disturbing forces. deformation of rock involves changes in the shape

Geology - . how to identify what kind of rock it is, find how rocks are made, and what they are used for. the three