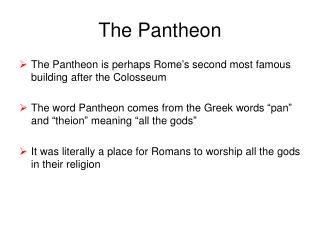 The Pantheon - . pantheon or ΠΑΝΘΕΟΝ. comes from 2 greek words π αν = all θ εος = god temple to all the

The Pantheon - . the pantheon is perhaps rome’s second most famous building after the colosseum the word pantheon comes

THE MAYAN PANTHEON - . chac. mayan god chac was the god of rain. he was a benevolent god for the mayans who often sought

The pantheon in rome - . anna glickman. location &amp; purpose. the pantheon was built in rome between 118-125 ad.

Norse Pantheon - . aegir. elyssa epstein. information. aegir is god of the ocean and king to the sea creatures. usually

Greek Pantheon - . you want gods, we got ‘ em . how it works. the ancient greeks attributed deeply human

The pantheon of Greek gods - . the greek gods and goddesses can be divided into 8 classes. although all greeks would have