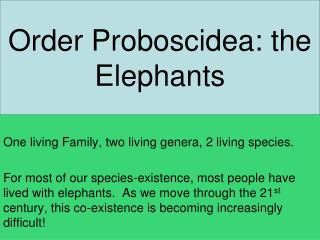 Order Proboscidea: the Elephants. One living Family, two living genera, 2 living species. For most of our species-existence, most people have lived with elephants. As we move through the 21 st century, this co-existence is becoming increasingly difficult!. The plan for the day:.

Lesson 17, Day 2 - . objective: to listen and respond appropriately to oral communication. . question of the day. on my

Hills Like White Elephants - . by ernest hemingway as adapted by ashley box. the hills across the valley of the ebro were

Hannibal and his soldiers marched through the Alps with men, horses, and war elephants. - Hannibal watches the elephants

A Day at the Circus - . by elisa mills. i went to the circus for the first time with my family. we sat really close to

How do little elephants grow up to be BIG elephants? - . mrs. camp 7 th grade life science. why do animals shed their