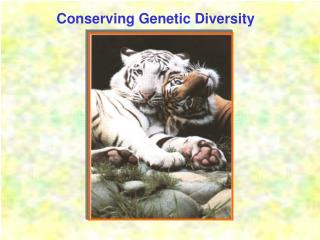 Conserving Genetic Diversity. DNA arranged in discrete packages called Chromosomes. Units of Genetic Diversity . Individual portions of a chromosome that “code” for a specific character are known as Genes. Allele A1. Allele A2. Allele A3. Character E1. Character

Genetic Diversity of Offspring - . genes have a better chance of survival if they are rearranged at each generation only

Quantitative Genetics and Genetic Diversity - Footprints of diversity in the agricultural landscape: understanding and

Genetic Diversity in Populations Terminology - . a gene pool is the sum of all the alleles for all the genes in a

Genetic Comparisons, Species Diversity and Index of Diversity - . how much dna do we share with other organisms?.

Conserving Water - . home water use audit. household use. more than 70% of indoor use occurs in the bathroom, and more