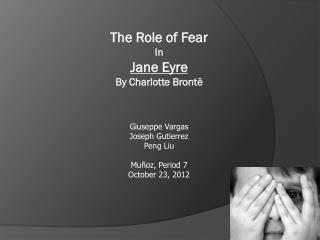 The Role of Fear In Jane Eyre By Charlotte Brontë The Role of Fear In Jane Eyre By Charlotte Brontë

DESTROYING MONSTROPOLIS - . there are very few monsters who warrant fear we have of them. andre gide . a piece of cake.

-phobia - . phobia- a persistent, irrational fear of a specific object, activity, or situation that leads to a compelling

GIIG: DOL - Contextual clues w rite what you think the underlined words mean. in his day he was lazy and improvident and

DEEP WATER - . by william douglas. warming up let’s look at the different types of phobias :. what do you fear from?