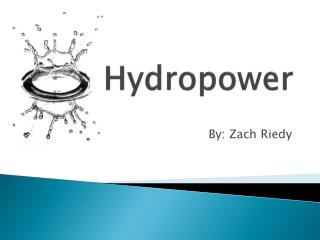 Hydropower. By: Zach Riedy. Hydropower. Electricity generated by harnessing the power of the gravitational force of moving water. It is the most widely used form of renewable energy. Main Goals. Hydro-power - . by: shaun, kaitlyn, and allison. hydro history. the earliest form of hydropower is from over 2000 years

Seasonal outlooks for hydrology and water resources: streamflow, reservoir, and hydropower forecasts for the Pacific No

DAMS - . dams. dam is a solid barrier constructed at a suitable location across a river valley to store flowing water.

BEST PRACTICES OF HYDROPOWER DEVELOPMENT - In the perspective of the state of wb. best practices of hydropower