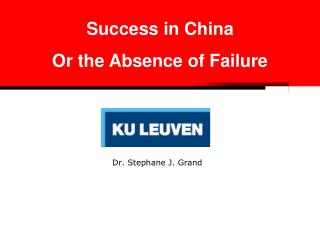 Success in China Or the Absence of Failure. Dr. Stephane J. Grand. The limits of experience. Your Instructor What you will learn and what to do with it The fundamentals: there is indeed a Chinese culture Application: working with the Chinese Application: investing in China Dr. Stephane J. Grand - Business in china: modes of entry. dr. stephane j. grand. back to the basics. what we have seen

Dr. Stephane J. Grand - The chinese as businesspeople and consumers. dr. stephane j. grand. business with the chinese. as

Dr. Ronald J Sollitto - Is an experienced podiatrist and he has been practicing podiatric medicine for several

Dr. Francis J Tumblety - . one of america’s first serial killers by abigail hong. the basics: date of birth and

Dr Oliver J. Brown - Dr oliver brown is a well respected and highly regarded specialist in obstetrics and gynaecology in