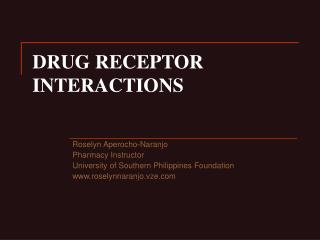 DRUG RECEPTOR INTERACTION - . lecture 4 pharmacology. drug receptors and pharmacodynamics. the action of a drug on the

Pharmacodynamics - . pharmacodynamic concepts . receptors: specific molecules in a biologic system with which drugs

Basic Pharmacology - . what is a drug? any chemical agent which effects any biological process. what is pharmacology